Maisie’s mother worked in Curran’s Factory during the war. Maisie left school at 15 (1948/9) and started in Horrocks - called Peggy Ann at the time, making children’s dresses. Horrocks took over – making bedding, dresses etc. The company had other factories and they had sales of all their products. Stayed there 10 years. Describes location of factory. Different world. Very brash women. Noise made her talk loudly. She worked on the special bench doing lots of tasks, then on the overlocker, finger caught on buttonholing machine. Periods affected her – restroom. This affected production of line. Looking after their machines. On special bench – more skilled. Describes processes. Cold and bending over machine affected her back. Xmas party for children – choosing presents. Piecework – holding back when being timed e.g. one dress in 4 minutes worth 50p. . Sewing and altering clothes at hometo supplement income. Supervisors ‘like our mums’. Music broke the monotony. Story about working late – fog and no lighting on road. Going out in Barry and Cardiff. Mentions Irene Spetti (stage name – Lorne Lesley when in factory, married to David Dickinson) and Rose Roberts – talented cabaret singers who worked in Horrocks. Tells story about supervisor (Miss Grünfeldt) offering to make her wedding dress in the factory. She still has the dress. Left factory because pregnant (1959.) Later worked in caffes etc. Factory - ’Best time of my life’
Read the transcript of the interview

Augusta left school at 16 (1961), worked as a cleaner, married and had a child before starting in Cardwells' in 1965. She was there for 2 years before having another child and returning to Slimma’s (1976-2002). She missed the girls when she finished. In Slimma's they all had targets and they checked on them every two hours. No union in Cardwells' but there was one in Slimma's. Towards the end lots of young lads from school worked as machinists too – pulling their legs. They sang to the music on the radio. No time to talk. She discusses the change from cash payment to paying through the bank. They had trips from both factories, a Xmas part with a turkey and wine as a bonus in Slimma's. Buying seconds. There was a creche in Slimma's – bussing children to Cardigan (c.1990??). She also worked in the Llandovery and Swansea factories. She left because of her arthritis.
Read the transcript of the interview

Myfi worked in the Corset Factory from the age of 15, immediately after leaving school. Her mother wanted her to go to college but Myfi liked sewing and was eager to get to work, so she and a friend went down to the factory to ask for work behind her mother's back. They both got the job but the managers had to separate them because they talked too much! Myfi began in the factory making ends, ie, finishing the corsets and then moved on to the stitching, where she excelled because she was very quick. She felt important as she earned one pound 10 shillings a week and could help support the family and pay the rent. There were 144 working there when she started in 1956 and this went down to under 50 aftewards, because fewer women wore corsets, and she was lucky to keep her job. The factory changed then to making bra slips. She married in 1959 and left to have her first child in 1960, returning to sewing work in Laura Ashley, Caernarfon, in the 1970s or 1980s.
Read the transcript of the interview

Margaret left school at 15 (1937) and worked for a year as a nanny in London before joining Polikoff’s in 1938. There she completed an order for Lady Churchill – overcoats for her Russian fund. Very heavy – wore them to their ankles. Also made uniform for Montgomery’s army in N Africa. She contributed 2d to the Red Cross and 2d to Lady Churchill’s fund out of her wages. Could fill in any job on the line. Hemming the Russian order. 2,500 workers when at its peak. ENSA entertained them. Stayed 9½ years. Her mother bought silk parachute from Tonpentre Co-op to make petticoats and knickers. Union meetings – against Sunday work. Wore bib and braces and slacks for first time. Needle in finger. Radio playing Vera Lynn songs. Friday afternoon cleaned own machines, took pride in them. Factory built for Eastenders because of war. Left when pregnant. Frowned upon for women to work Sundays. Different lines organised social dos. Paid holidays from 1948 onwards. Had to contribute towards Bank Holiday pay. After the war they made de-mob suits. Left 1949. Enjoyed there because she met different kinds of women – chapel going – Bethany Gelli with its drama group, hockey club, very pub going – dancing etc. Later she went to the bag factory in Llwynypia – making bags etc for M&S- again sewing with machine. Then shut down after c. 2 years.
Read the transcript of the interview
Part of this interview is available as an audio file

Melva left school at 14 (1938). During the war, she and her sister went to Birmingham, found digs and worked in the Spitfire factory. Long hours. The bombs and the fear. She made cogs, screws etc.for the wings. Poor conditions in the digs – bread and dripping and nowhere to wash. They asked them (because they were Welsh) to sing. The machines were stopped during air raids. They sent their pay home. They mixed with the Scots. She spent a year there (c.1940) and then had TB. Her sister lost an eye because of shrapnel. Night shifts. She was sent to Craig y Nos TB Hospital. Then she worked in the Hargreaves Pop factory (c. 1943) washing bottles and packing crates. Kinds of pop and crisps. A small factory. Melva sang with a band. She left because of her health.
Read the transcript of the interview

When Laura Ashley opened in Carno, Gwlithyn went there to work in the office, doing the wages. This was 1964. She left to have a baby in 1966 and then did outwork for the company until her son went to school, at which time she went back into the factory as a machinist, working 9am-3pm. Laura Ashley was adamant that the mothers were able to take their children to school and collect them again. Gwlithyn learned how to do clothes like dresses, skirts and blouses in the factory and had taught herself to do ovengloves and tea towels doing outwork. She describes her years at Laura Ashley as the happiest ones. Many members of her immediate family worked there and her brother Meirion went from the factory floor to company director. Gwlithyn worked as a machinist at Laura Ashley until she was made redundant in 1990, when the factory changed to making curtains. By this time, she was a supervisor. She got a call from the factory asking her to come back, which she did, firstly at Carno then later at Newtown and retired in 2011.
Read the transcript of the interview
Part of this interview is available as an audio file
Read an English translation of this audio clip 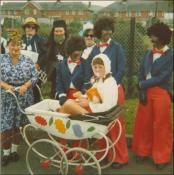 Her mother is interviewee VSE012. Susan worked in the pencil factory for six months in 1968, while waiting to start her nursing career. Her first job was to put white caps on diary pencils – blisters on fingers. Staetdler took over when she was there. Also checked paint on pencils and sharpening them. Fellow-worker wore curlers and scarf. Caused line to stop. Working there an absolute eye-opener. First wage £7 and she bought herself a leather coat. Some harassment – men taking advantage of women. Story about taking cigarette breaks in toilets. She met her husband there – industrial chemist. In paint shop a strong smell. Music playing and singing along – Beatles and Mary Hopkin. Too busy to talk. Went to dinner dance in Porthcawl at Xmas. Factory ‘gave me a bridge to working life … good experience for my nurse training.’
Read the transcript of the interview

The speaker left school at 15 (1968) and started in Slimma’s. It had been Calders previously. Slimma’s made two way stretch – ski pants. Her first job was packing, then labels. She felt old-fashioned compared to the other girls – mini-skirts, platform heels, smoking and going to the pub. No targets. No union. When Dewhirst came in (several takeovers later) there were hard targets, unions. Slimma’s girls ironing their hair! Heavy metal music. When pregnant you worked up to a few weeks before birth and returned in so many weeks – your job was kept open for you. She left when pregnant (c.1972) and returned c.1980. Totally changed: learning more skills; pay depended on reaching targets; and compensation for sewing through finger. She notes the Eaton system checking on performance – terrible; cheating; good overtime pay; reputation of factory girls; boy machinists – problems; how supervisors got their jobs; swearing and the union and some stealing garments. She had carpal tunnel syndrome from hemming – went into auditing and then back as machinist. Social club with trips e.g. to Ireland. Made redundant 2002.
Read the transcript of the interview

Margaret began in the Corset Factory at 15. She had no choice as her mother had told that once she was 15, she had to look for work. So she went down to the corset factory with her friend and they got a job. She earned £1.60 and if they worked overtime she got a shilling extra. Margaret gave her wages to her mother and she had two brothers who worked also. She was trained how to sew straight doing hems and bindings, and this training went on until a worker was able to handle a machine. She was very good at her job and worked as a supervisor at age 17 during the illness of the regular supervisor, Nansi Fawr. She did different jobs there and her sister Jeanette, who was blind, also worked there for five years. She liked working there even though it was very noisy with the machines. She said she'd go back now if it was with the same crew. Dinner time they used to get chips from a shop nearby and as Margaret worked near the door, the girls used to give her their orders and she'd go and fetch them. She was in the corset factory 6 years first time round, and went back for about six months four years after she married. After this she stayed at home to raise her children and when they went to school she did other jobs - cleaning and home help and finally working with the disabled.
Read the transcript of the interview

Gwen left school at 14 (1936), then she worked on a farm and as a cleaner. During the war she worked in Morris Motors – every factory had to employ one disabled worker per 100 able. She had a weak arm. It was good money (c. 1940) – pocket money from it. The work on the car and aeroplane radiators was heavy. Since a labourer had to help her she was paid less. There was a fuss when the Union started – she paid a groat but anonymously. She remembers the girls buying goods from catalogues. She refused to move to harder work – by showing her disabled card. Bruising from handling the radiator blocks. It was a noisy factory which has affected her hearing. Lots of joking and singing. She went on holiday with the girls, fun at Xmas. During the war, stars from the entertainment world visited. She got married (1953) – received a clock as a present. She left c.1981.
Read the transcript of the interview